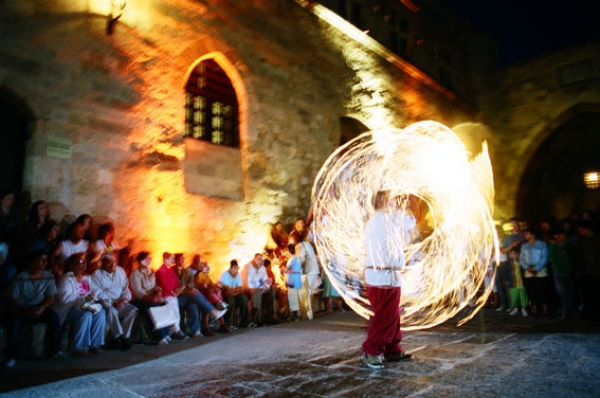 Posted at 07:18h in Events, Holidays by rodiangallery
0 Likes

The “Medieval Rose” is a non-governmental, non-profit association, which was recently established (2005) with the ambitious but realistic aim of organizing an annual Medieval Festival within the walls of the Medieval Town of Rhodos – the best preserved, while continuously inhabited, surrounded by walls and moat, medieval town in the world (monument of cultural and architectural world heritage – UNESCO 1988).

The Festival comprises scenes of everyday life in the Medieval Rhodes, as well as relevant cultural events. This is achieved through the co-operation of the organizing committee with historians, archaeologists, actors, musicians, performers, visual artists and craftsmen. An additional effort is made to attract as many volunteers as possible, as the Festival is not just “a theatrical play”, but aims at the active participation of every person entering the gates of the medieval town.

A journey through the Middle Ages!
A wandering through the mysterious streets of the Medieval Town and the obscure Citadels, at a time when the Alchemists were seeking the Mandrake and the Fairies were dancing around the fountains, enchanting passers-by.At times, when romantic love was growing in the shadow of a dreadful war and endless battles.

And somewhere there, hidden in the swamp, a terrible Dragon, mangling children and adults.

At the Medieval Markets the best sugar of the world, as well as spices, perfumes, textiles, pottery, soap and music, lots of music…

…And there! The Order of the Knights crosses through the crowded public squares, full of scholars, magicians, artisans, merchants and craftsmen from all over the world!The Walls, an embrace of stone around a multi-national feast!

Tradition, History & Myth,
The Legend of Rhodes
Ιn a Festival!

The 5th Medieval Rose Festival of the island of Rhodes 2011, will take place from 28 May to 2 of July (every Saturday and/or Sunday). Event will take place with the support and under the Aegis of the Municipality of Rhodes.

Agenda, in general, will include:

The Festival will end with the unique Castle Fayres:

For more information about the event, you can visit their Facebook event page ( https://www.facebook.com/event.php?eid=141372412601930 ) or the official website (http://www.medievalrose.org)